The service was held at a Tongan Methodist church in the suburb he grew up in, and is the first public memorial for the former All Black, who died suddenly earlier last week. 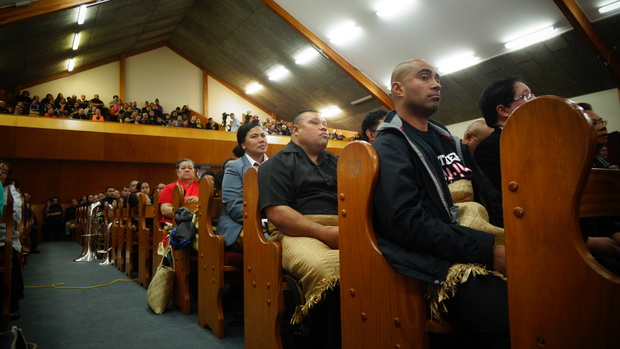 Among the community members, included staff and students from Jonah's primary school and college, Pacific cabinet members and community leaders as well as his Mother, Hepi Lomu, and other family members.

Mrs Lomu led a candle-light processional in which 40 candles were lit in his memory.

The service's organiser, Salote Heleta-Lilo says the response from the community has been enormous.

"The community needs to mourn. A great loss for our great beloved son and yes definitely they need to mourn. And this is what it's all about."

Jonah Lomu's family say details are still being discussed between family, rugby officials and the government, for the main public memorial service to be held for the rugby superstar.

A teacher at Wesley College where Jonah Lomu went to school, says the entire school is still stunned by his death.

Richard Smythe was among the hundreds of people who attended the first public memorial for the former All Black, who died suddenly last week.

In his autobiography, Lomu credited the school for saving his life after a troubled upbringing.

Mr Smythe, who was approached by Jonah's mother as a last resort to get him into the school after his application had been declined three times, says Jonah maintained loyal ties with the school and continued to visit almost every year.

He says Jonah was an icon for the students.

"They all knew that Jonah came from Mangere, ...and that he just came from nowhere and from a tough background. And with commitment, he was able to make the best of his life in a way that would showcase that all - all Polynesian, all peoples can do."