Papua New Guinea cricket coach Dipak Patel says the next session is crucial to their chances of an outright victory against Afghanistan in the Intercontinental Cup.

Mahura Dai top-scored with 129 on day two in Sharjah as the Barramundi's were eventually dismissed for 295 late in the first session, securing first innings points and a sizeable 151-run lead. 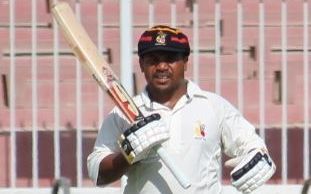 But Afghanistan made a better fist of their second turn at bat, with Mohammad Shahzad reaching three figures and Hashmatullah Shahidi unbeaten on 92.

The home side was 284 for 3 at stumps, an overall lead of 133 runs, and PNG coach Dipak Patel says the first session on day three could define the match.

"It's a very flat wicket. There isn't a lot there for the bowlers and it is hard work. We are in a strong position, it's just a case of whether we can turn up tomorrow morning and make things happen and that's where the state of the game is. It's just starting to take a little bit of turn but not a hell of a lot. It's not going to be easy for our bowlers to get the seven wickets required".

Dipak Patel says it's encouraging to see Barramundi's players scoring hundreds and taking wickets but says his players are still learning in the longer form of the game.