A Vanuatu NGO says it is hoping to see up to 20 women in parliament after next year's elections if the government approves its proposal for reserve seats for women. 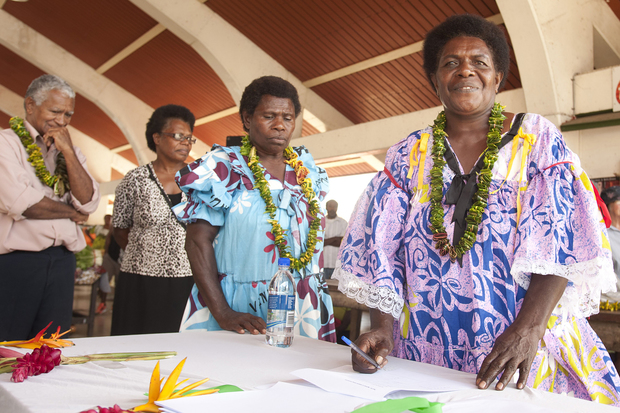 Women in Vanuatu are working towards better representation in Parliament. Here, the Market Women in Vanuatu sign onto their first association. Photo: RNZI Courtesy of UN Women

The Coalition Fund for Gender Equity's Hilda Lini says they have put forward two proposals to government one for the temporary special measures on reserve seats for women and the other for a gender equal list staggering male and female candidates on the voting order.

Ms Lini says Vanuatu used reserve seats for women in 2013 at the provincial level and it proved to be a huge success.

She says so far the government is yet to respond to the proposals but says she is hoping the response will be positive.

"If it is going to be any multi-seat constituency from two upwards our calculation is we could have from 19 to 20 women while there would be 32 men. That's the proposal that had gone to the government."

Hilda Lini says her organisation is already carrying out workshops to prepare women to contest the polls in 2016.