Fiji's opposition National Federation Party says the government has no regard for the rule of law and the constitution that it formulated and forced upon the people of Fiji.

The claim was made by the NFP President, Tupou Draunidalo, after Tuesday's departure of the police commissioner, Ben Groenewald, who quit after saying there was military interference in police work.

Ms Draunidalo says it is clear that Mr Groenewald was given his marching orders.

"He himself said that he left because of military interference and we think that he left because he was told to go, given 24 hours to leave. That's no resignation, that's being fired. And being replaced by a miliary officer? I don't know what training they have in policing. Policing is to do with civilians and civilian matters."

Within an hour of Mr Groenewald's resignation, Mr Bainimarama appointed the land force commander, Col Sitiveni Qiliho, as his successor, which she says is a case of nepotism and cronyism of the highest order.

Ms Draunidalo says this will demoralise members of the police force who should now rightly fear the security of their employment after their boss was cast aside.

She also says this shows that the military is above the law and is abusing its constitutional authority as the supposed ultimate guarantors of peace and security of the nation.

She adds that the international community should stop turning a blind eye to all of this for the sake of preserving and promoting pseudo-democracy.

There has not been any reaction from any foreign government. 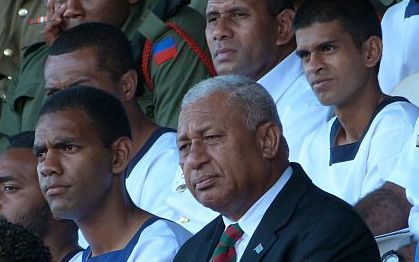