Reports from French Polynesia say the head of a public works agency, Bruno Marty, has been detained for questioning on suspicion of abuse of large sums of public funds. 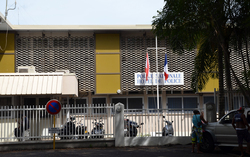 Two years ago, Mr Marty was given the agency position by the then president, Gaston Flosse, after suddenly resigning as transport minister after crashing his car.

He was found to have been almost five times over the legal alcohol limit while being in charge of road safety.

It became public that he had three drink drive convictions and was supposed to have surrendered the licence months earlier.

Last year, he was given a suspended six month jail sentence.