Asylum seekers on Nauru are to be allowed to move freely around the island from today.

Nauru's Department of Justice and Border Control posted a notice on Friday saying Open Centre arrangements at the asylum seeker detention centre would be expanded to allow asylum seekers freedom of movement 24 hours a day, seven days a week.

The government says it will introduce legislation at the next sitting of parliament to enshrine the arrangements in law.

Previously asylum seekers had to abide by strict curfews.

The government started trialling its Open Centre arrangement in February this year allowing selected asylum seekers out into the community at certain times of day.

At the time it said it hoped to ease some of the asylum seekers' tension and frustration and prepare those deemed to be refugees for life outside.

The government says the network of community liaison officers is being expanded and other security measures are being put in place.

The policy change comes just days before an Australian court challenge to the lawfulness of the Australian government's role in offshore detention on Nauru.

The Refugee Action Coalition says recent attacks on Nauru make a mockery of the the island's new open camp arrangement.

A spokesperson for the group Ian Rintoul says the open camp arrangement is a meaningless gesture as some people are just too afraid to leave the centre.

He says there is a lack of security in the camp and the community.

Mr Rintoul says this was highlighted again last week when two 18 year old refugees were attacked as they returned to their camp at Ewa.

He says the men were ambushed by up to a dozen local Nauruan men who hurled abuse, demanded money and stole their mobile phones.

Mr Rintoul says one of the men, a Pakistani refugee named Zijah, was severly cut and brusied after being knocked to the ground. 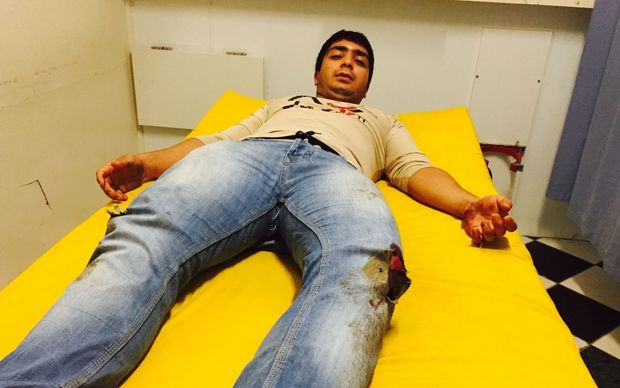 The Refugee Action coalition says a Pakistani refugee on Nauru, Zijah, was injured after being ambushed by locals. Photo: Supplied by Refugee Action Coalition