Fiji are through to next year's Rio Olympic football tournament after beating Vanuatu 4-3 on penalties in last night's Oceania qualifying final. 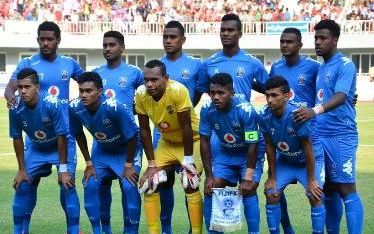 Fiji's Under 20 football team are touring Asia to prepare for the World Cup. Photo: Fiji Football

The match finished goaless after 90 minutes and extra time in Papua New Guinea.

Fiji are the first country other than Australia or New Zealand to represent Oceania at the Olympic football tournament.

Vanuatu were a late addition to the final after the New Zealand under 23 football team were disqualified just hours earlier.

New Zealand defender Deklan Wynne, who was born in South Africa, was deemed ineligible, but the New Zealand Football chief executive Andy Martin said he strongly refuted the ruling and would be challenging the decision.