The New Zealand All Blacks have beaten Samoa 25-16 in their first ever rugby test in Apia. 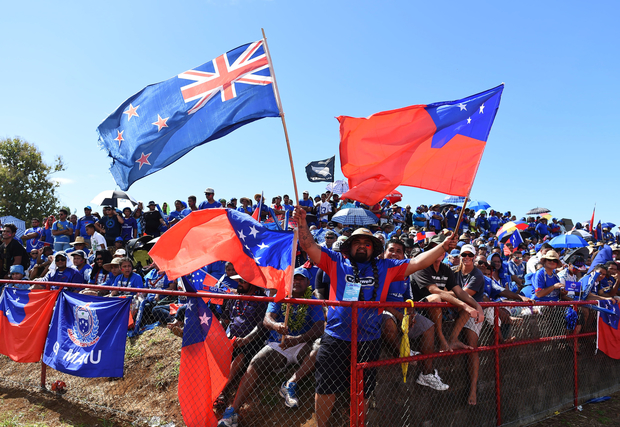 Both sides scored one try with George Moala touching down for the All Blacks, while Dan Carter kicked the conversion and 6 penalties.

It is the lowest score by New Zealand in a Test against Samoa, while the 9 points is their smallest margin.

Loose forward Alafoti Faosiliva scored Samoa's try during a dominant period for the homeside midway through the second half.

The All Blacks appear to have got through the game without any injury concerns.

All four debutants got got time for the All Blacks, wing George Moala started, while prop Nepo Laulala, halfback Brad Weber and centre Charlie Ngatai.

AUTAGAVAIA TIPI AUTAGAVAIA: Well to be quite honest with you Moera, even though we didn't win the game against the All Blacks and we never went... as of the last test match the feelings of people are very happy, still excited because of the scores. They were expecting that the All Blacks were going to score maybe more than 100 points. But it was 16 - 25. People are still happy, still behind their team.

MOERA TUILAEPA-TAYLOR: What was the atmosphere like at the park?

ATA: The atmosphere, oh man, we do have the All Blacks playing in Samoa for the first time. There was a lot of cheers, screaming, cheering from both the All Blacks, a minority of All Black cheers compared to the domination by the local fans of the Manu Samoa team.

MT: I know that everyone still gets quite inspired when they hear the Manu Samoa team do their performance, but how were people when the All Blacks did the haka; they must have been quite excited to see it live rather than on tv?

ATA: Oh yes they were expecting that Manu Samoa was going to perform their siva tau at the same time but I think Manu Samoa paid respect by having the All Blacks do the haka first before their siva tau.

MT: When the All Blacks performed their haka what was the response like in the park?

ATA: It was very silent, but there was a lot of cheers and boos in the stadium but that is something that is going to come from the Samoan fans.

MT: And are people still hanging around the park hoping to get some signiatures from either the All Blacks or the Manu Samoa team?

ATA: Oh yes, people are still hanging around the park. People behave themselves so well, people are very happy.