Typhoon Chan-Hom, which had been posing a threat to Guam and the Northern Marianas, has been downgraded to a tropical storm.

But authorities in Guam say the storm remains unpredictable and could resurge, and are advising people to still take precautions.

They say people should put up shutters, clear debris, secure outside furniture, replenish emergency kits, share information with neighhbours and stock up on water.

The storm is expected to pass between Guam and the southern part of the CNMI on Saturday night.

It is still several hundred kilometres away from Guam but at its centre has winds of up to 135 kilometres an hour.

Earlier, the governors of the Northern Marianas and Guam placed the territories on alert over the approaching storm after it was this morning upgraded .

The CNMI Homeland Security and Emergency Management said it would open its Emergency Operations Center and assign shelters in the schools. 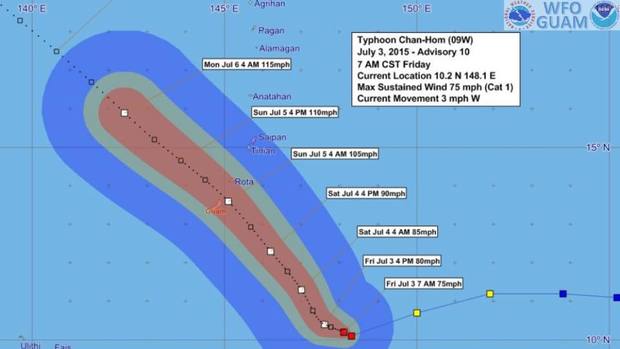 They warned the forecast could change quickly and this underscores the need to be prepared.

The Government is warning people to be ready for flooding and to ensure drains are clear.

The typhoon is moving in a northwesterly direction and the Guam Weather Service says it is expected to pass between Guam and Rota at which stage the winds could be up 168 kilometres an hour.