Cyclone Raquel is weakening but forecasters are warning flash floods and landslides are still likely for Solomon Islands. 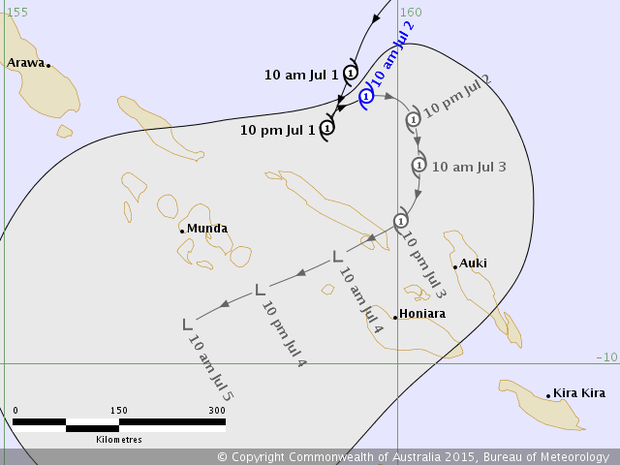 The category one cyclone is 315 kilometres north of Honiara and travelling east but is expected to have moved west across the southern end of Isabel by Friday morning.

Experts say the cyclone is unseasonal and are more typically expected from November through April.

A spokesperson for the The Australian Bureau of Meteorology, Jess Carey, says it is unlikely to reach category two but people still need to be prepared.

"In the last 24 hours it was almost stationary overnight but still is a category one system where you'll still be expecting 90 to 100 kilometre per hour gusts. Rainfall well in excess of 100 millimetres in a 24 hour period is likely and with that rainfall you can expect flash flooding and landslides as well."

Jess Carey says areas south of a cyclone are always affected worse and rough seas and strong gusts are likely near Honiara and on Guadalcanal over the next few days.

A heavy rain warning is in place for all provinces and Islands.

Meanwhile the weather service in Guam says tropical storm Chan-hom could become a typhoon within the next 12 hours.

The storm is strengthening as it moves west towards the Commonwealth of the Northern Marianas and Guam where it is expected to hit in the next couple of days.