Flying Fijians rugby coach John McKee has named a 40-man squad to attend a training camp in Suva next month.

Nine players are based in Fiji and two in New Zealand, with the rest scattered across Europe in France, England, Wales, Scotland, Italy and Romania.

John McKee says the four-day camp will focus on fitness and building on the game plan and style of play developed during last year's international windows. 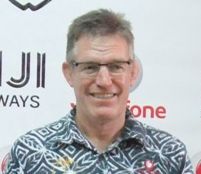 John McKee says the squad to play the Maori All Blacks and Pacific Nations Cup games will be named following the camp.