Former Save the Children staff say there are inadequate policies in place to respond to crimes against children at the Nauru detention centre. 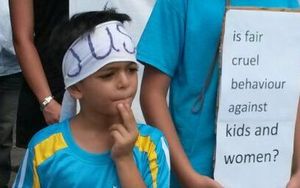 The staff gave evidence to a Senate inquiry into allegations of abuse and poor conditions at the Australian-run centre.

Viktoria Vibhakar told the inquiry about an eight-year-old girl, with the pseudonym Mia, who had been sexually and physically assaulted at the camp.

She says even though Mia disclosed the abuse, she was not removed from the camp.

"Although Mia had a father living in Australia able to care for her safely, she was detained for more than seven months after disclosing sexual assault. She eventually planned to take her own life. Despite the risk to her physical and mental health, and that she may have been subject to ongoing sexual assault that she was too afraid to disclose, the department of immigration and border protection did not remove her until her caregiver attempted suicide."

The inquiry also heard that immigration minister Scott Morrison were made aware of a sexual abuse allegations of a child in December 2013, but did not act.