Anzac Day ceremonies have been held across the Pacific this morning, as the region commemorates its role in war. 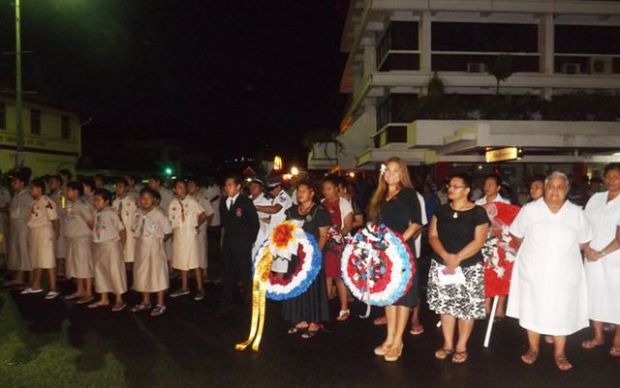 In Samoa, large crowds turned out at a dawn service in the capital, Apia, to remember those who fell in war.

Our correspondent, Autagavaia Tipi Autagavaia, said 49 soldiers of Samoan descent, who had joined either New Zealand or Australian forces in both world wars, were remembered in Saturday morning's ceremony.

Speaking at the service, Samoa's Prime Minister Tuilaepa Sailele Malielegaoi praised the courage and service of local soldiers who fought to maintain peace and freedom.

"The First World War was described at the time as 'the war to end all wars'," said Tuilaepa. "Sadly, since then, World War Two has been fought and other localised wars and conflicts continue to happen up to this day."

"Samoans have served in World War Two and now in UN peacekeeping operations in conflict zones around the world." 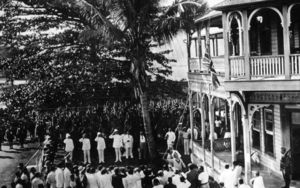 New Zealand's first act of the First World War was in August 1914 when it sent a 1485-strong military force at the request of Britain to take control of Samoa, then a German colony, to disable a radio transmitter on the main island, Upolo. New Zealand went on to rule Samoa for another 50 years.

At Saturday's service, Prime Minister Tuilaepa reflected on Samoa's complicated place in the conflict of 1914-1918: "For Samoa, as we heard last year during the commemoration for the start of the First World War, and its impact on the nationhood path taken by our country, there were Samoans serving in World War One on both sides of the battle lines."

Tonga also commemorated its 91 soldiers who were sent to the battlefields of Europe and the Middle East in the First World War, as well soldiers who were deployed to other conflicts and on peacekeeping missions at a ceremony at the Cenotaph, Pagai Si'i, in Nuku'alofa on Saturday morning.

Tongan soldiers were joined by soldiers from both New Zealand and Australia for the ceremony. 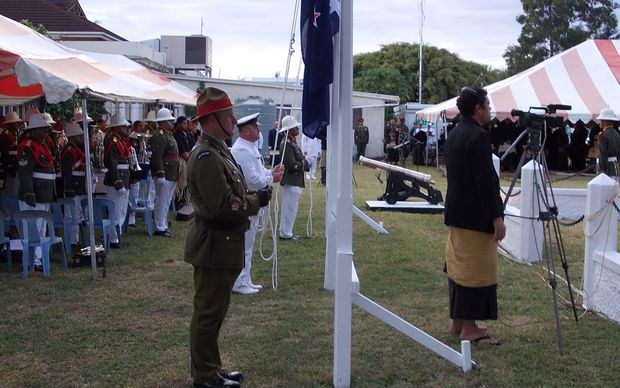 In Papua New Guinea, large crowds turned out for a ceremony at the Bomana War Cemetery near Port Moresby, where over 3,000 soldiers who died during the country's occupation in the Second World War are buried.

Addressing the crowd, Prime Minister Peter O'Neill said the bravery of Papuans and New Guineans who served in the Australian Army during the war, and the bravery of Papuan villagers who helped allied soldiers along the Kokoda track remains one of the most honoured parts of the history of war in the Pacific.

The Kokoda track campaign consisted of a series of battles between mainly Australian and Japanese forces in what was then the Australian territory of Papua. During that campaign, local Papuan carriers, who Australian troops called the 'Fuzzy Wuzzy Angels', carried supplies up the Kokoda track to allied soldiers and carried back injured troops for treatment.

"We pay special tribute to those brave men and women, who wrote their names into history with distinction and courage," said Mr O'Neill.

"Right now we stand on sacred ground -- where so many fallen warriors are buried. Here at Bomana, 3,834 service personnel from Australia, New Zealand, the United States and other allied partners have their final resting place...they will forever rest in our soil with due care and respect," he said.

"Now the Pacific lives in peace, and our countries have moved on from the horror of war -- but we will honour those who paid the supreme sacrifice," said Mr O'Neill. 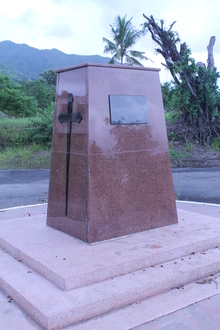 Hundreds of Cook Islands soldiers enlisted for the First World War, most of them in their teens, and served as labourers and ammunition bearers in France, Egypt and Palestine as part of the Maori contingent.