The SODELPA Youth Council says by pushing ahead with plans to change the flag, the Fiji prime minister is using tax-payers money to fuel his hunger for self glorification. 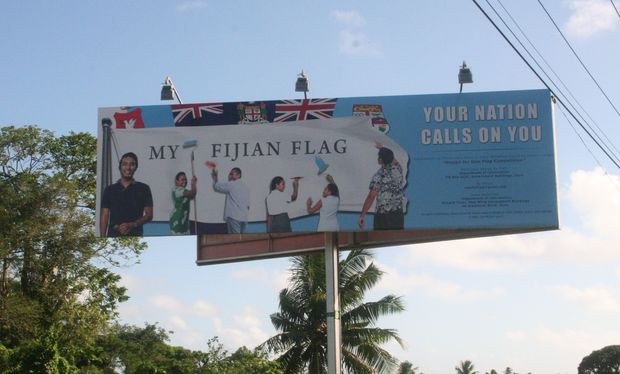 A billboard outside Vatuwaqa Primary School, authorised by the Fiji Government. Photo: Supplied

The Council says Frank Bainimarama has ramped up his campaign for change with eight days to go before the deadline for a national competition for a new design.

Its president, Peter Waqavonovono, says the Prime Minister is pushing his own agenda whilst a parliamentary process is in place, thereby breaching parliamentary standing orders.

He says in the last few days Mr Bainimarama has spoken at a college encouraging design entries and authorised a billboard outside a primary school, which depicts young people painting over the flag.

"I personally believe that this move by the Prime Minister is a move to sort of like meet one man's vision and we need to build Fiji together but it seems like it's a one man show."

Peter Waqavonovono says the prime minister is targetting the young because he knows the working class and senior population would never support such a move.

He says he's preying on the naive with a calculated propaganda campaign.

SODELPA and other opposition parties have presented a petition to Parliament asking for a referendum on a flag change.