The defence in French Polynesia's OPT case says the attempt to try a former president, Gaston Flosse, for corruption should be abandoned because there is no basis to hold an appeal court sitting.

Flosse and seven others have this week been summoned over the long-running major corruption case involving the OPT telecommunications company in a bid by the prosecution to retry them.

Last year, the appeal court dismissed the case and quashed the five-year prison sentence given to each Flosse and a French advertising executive, Hubert Haddad.

The prosecution has argued that the case was dismissed on a technicality last year without the court examining the substance.

The defence, however, says there is no basis to continue with the case.

When the eight had been convicted two years ago, Haddad was found guilty of paying about US$2 million in kickbacks over 12 years to Flosse and his political party to get public sector contracts.

In 2013 Flosse was elected president and the lawyer who had obtained a court order for the publicly owned OPT to be reimbursed US$5.6 million was dismissed.

The lawyer expressed regret at the time that those convicted for defrauding the OPT could take over key aspects of the case even before they were tried in the appeal court. 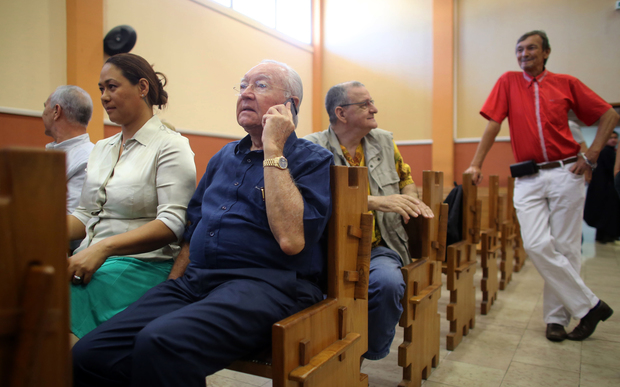