In the Marshall islands, big waves and heavy rains have battered coastlines in Majuro Atoll and the southern Marshalls as a tropical disturbance over 300 kilometres south of the capital picked up power.

There was no flooding during the day yesterday, but weather officials say high winds and waves, coupled with the high tides at 8 o'clock last night, at half past eight this morning, could cause inhabited islands to be inundated with seawater.

Our correspondent says wind strength yesterday evening had not yet reached sufficient strength for the system to be upgraded to a tropical storm.

A visiting yacht was blown onto a reef in Majuro on Tuesday evening, but no one was injured.

The US National Weather Service in Guam issued an alert yesterday describing the storm as a large tropical disturbance centered over the Marshalls, moving in a northwesterly direction, bringing gusty winds and locally heavy rainfall throughout the Marshall Islands through today.

The storm was on track to hit Kosrae and Pohnpei in the Federated States of Micronesia tomorrow.

The Guam weather office warned Marshall Islands residents of "dangerous surf" throughout Thursday, and said that hazardous surf will continue in Kosrae through to the weekend. 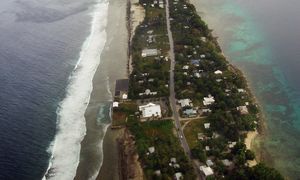