Michael Foon, with the national disaster management office, says the seawall had only just been repaired, before being damaged again by the 2.9 metre high waves.

He says they are looking at building the sea wall higher, but it's already one of the highest on the island.

"I think the option really is to look at more permanent solutions, like putting wave breakers around the area. It involves structures like tri-pods to be put in front of the sea-walls. When dealing with very big waves, it sort of takes away the energy before it goes and smashes the seawall."

Michael Foon says the option of moving the hospital further in-land has been floated, but nothing concrete has been decided. 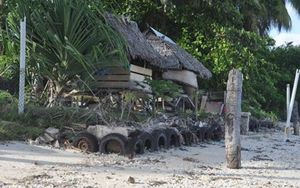