The Kiribati Public Health Department says the damage to one of only two hospitals on South Tarawa is so severe, it will take at least a fortnight to repair.

It says Betio Hospital was left in a state of disarray after disastrous waves flooded it on the 20th of February.

The Director of Public Health, Dr Patrick Timeon, says the extensive damage meant patients had to be evacuated, and all medical services for the hospital suspended.

Power lines were damaged, and a temporary underground sewerage system was stripped out from underneath.

Dr Timeon says patients have been accommodated in a sports complex, as the only other hospital on South Tarawa, which is also the main hospital for the 33 islands of Kiribati, was already at capacity.

He says New Zealand is assisting with the ongoing repairs, and a request has been sent to the local High Commission to speed up work.

Dr Timeon says while the hospital has started to experience more frequent flooding, this is the hospital's first disaster. 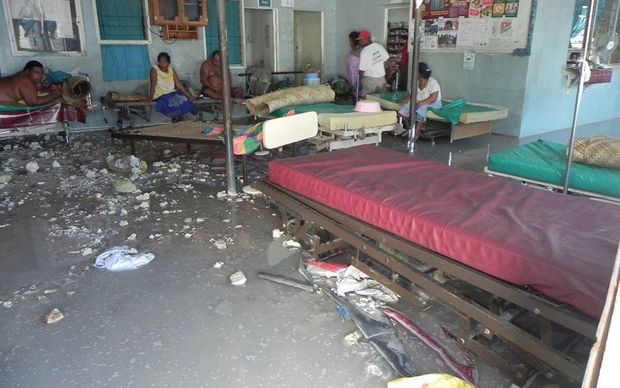 Big waves rendered disastrous damages to Betio Hospital in Kiribati, leaving it flooded with seawater and in a disarrayed state. Photo: Kiribati Ministry of Health