Fiji's prime minister has launched an attack on the leader of the opposition, Ro Teimumu Kepa, for asking about the fate of the jailed coup maker George Speight. 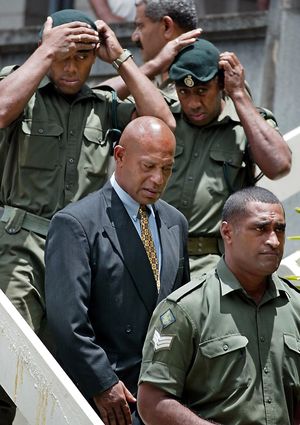 Fiji coup leader George Speight (C) leaving the High Court in Suva after being sentenced to death for high treason for his role in the overthrow of former prime minister Mahendra Chaudhry's Government on 19 May 2000. Photo: AFP

Speight is serving a life term for his role in the 2000 coup.

While opening a Legal Aid Commission Office in Lautoka, Frank Bainimarama questioned why Ro Teimumu asked in parliament about the sentences imposed on Speight and other coup perpetrators.

She enquired when Speight and his co-conspirators would be eligible for parole.

Mr Bainimarama says the opposition leader should explain to Fiji why she is so concerned about Speight.

He accuses her of having consorted with Speight when she visited the parliamentary complex during the 2000 hostage drama.

Mr Bainimarama says Speight will spend the rest of his life behind bars and the opposition should stop raking over the coals of the past.

The Attorney General Aiyaz Sayed-Khaiyum is reported by FBC News as saying the coup-makers would need to make a petition to the Prerogative of Mercy Commission.