Tonga's flag has been flying at St Peters Square in the Vatican City as Tonga's first cardinal was formally appointed by the Pope. 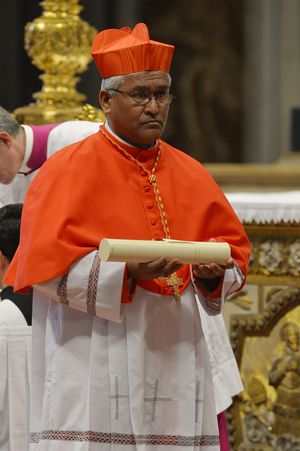 Soane Patita Paini Mafi, Bishop of Tonga, is elevated to the rank of Cardinal by Pope Francis during a consistory, on February 14, 2015 at St. Peter's basilica in the Vatican. Photo: AFP

The King and Queen and 200 other Tongans were in Rome over the weekend to witness Soane Patita Paini Mafi's appointment alongside 19 others.

Church members in Tonga have started preparations for Cardinal Mafi's return to Tonga on the 26th of February, and his first mass on the first of March.

Soane Patita Paini Mafi will be among an elite group of cardinals who will have voting rights on Pope Francis' successor.