An Australian psychiatrist who worked with detained asylum seeker children says post-traumatic stress and self-harm are likely to be seen long after they leave the camps. 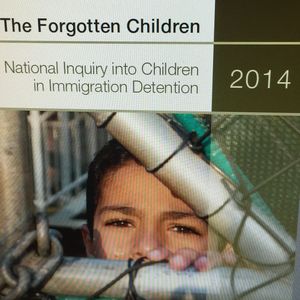 An Australian Human Rights Commission report, The Forgotten Children, has found children detained indefinitely at the camp on Nauru are suffering from extreme levels of distress.

It says more than a third of children developed a mental illness requiring psychiatric care.

A child and adolescent psychiatrist, Nick Kowalenko, says the effects of the camps and other trauma could stay with the children for years to come.

The Australian Immigration Ministry has slammed the report as largely redundant.

A spokesperson for the Ministry says the circumstances the report refers to are confined to historic reference.

He says the numbers peaked under the Gillard Labor government in 2013 when 1992 children were in detention, but today, just 192 children remain in detention.

He says the government is working on moving out as many detained children as possible, but some of the cases involve complex security concerns, or other matters around their parents.

He says many of the report's recommendations reflect existing government policies and are superfluous.