The Supreme Court in Samoa has found the Associate Minister for Trade and Commerce, Muagututagata Peter Ah Him, guilty of two charges of forgery. 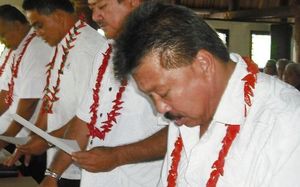 The ruling party MP was acquitted of a third charge of forgery and theft.

Muagututagata had stood trial in November after a Chinese company in which he holds a 10 percent share filed a complaint to the police.

The company, Grand Ocean Limited, had accused the Associate Minister of forging an invoice to clear two shipping containers and inventing 30 thousand US dollars of costs.

He is to be sentenced on the 23rd of February.

Meanwhile on a separate case, the charge of attempted rape against the suspended editor of the government newspaper Savali, has been withdrawn before the chief justice, Patu Falefatu Sapolu.

It comes after the prosecution has asked for the original charge to be substituted with two counts of indecent assault against the accused, Tupuola Terry Tavita.

The new charges will be heard for mention in the district court today.