A half-million US dollar bank robbery in the Solomon Islands ended with a maimed security guard, a car crash and three arrests on Monday. 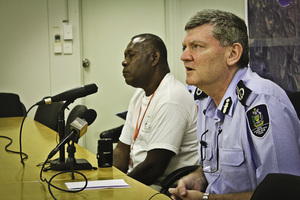 The Solomon Star reports two security guards have been hospitalised after the incident, which occurred in the heart of the city in broad daylight.

The masked robbers attacked the guards with machetes as they wheeled two boxes of cash out of the bank accompanied by a female banker at Westpac Bank.

One of the guards, Michael Maelea, had his hand cut off at the wrist as he tried to defend himself.

Police pursued the men in a car and arrested three of the four suspects an hour later, when the getaway car wheeled off the road, overturned and crashed near a private home at Kakabona.

The Police Commissioner, Frank Prendergast, says one of the boxes was broken and the fourth suspect escaped with an amount of money, reportedly about $50,000 US dollars.