A blind broadcaster with Samoa FM radio network, Herbert Bell, has been awarded the Advocacy and Human Rights Award for his role in promoting the rights and abilities of the disabled in Samoa. 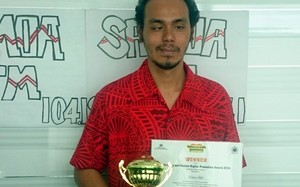 Totally blind at birth, the 28 year old went on to complete a Diploma in Media and Journalism Studies at the National University of Samoa and has been employed by Talamua Media as a Radio Presenter when he graduated in 2009.

The award was presented by NOLA, the national body that promotes and coordinates the advocacy work for people with disabilities in Samoa.

Talamua Media, which owns Samoa FM, was also awarded the prize for Accessible Workplace for People with Disabilities.