The new finance minister of Solomon Islands says tax reforms will be a priority for his ministry under the democratic coalition for change government. 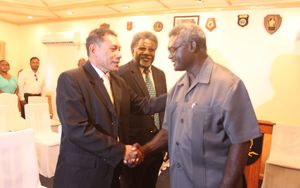 Also a former prime minister, the MP for Marovo, Snyder Rini, says he hopes to help steer the country out of the economic slump it has experienced after a major flood disaster in April this year.

" First of all I have to go into the ministry and see what's going on there. And try to see, what should be done to move the country forward. As I have said that our main task there is to, grow the economy."

Mr Rini said it is too early to go into the details of the new Government's fiscal policies but he feels more can be done to ease the tax burden on an already struggling private sector.