To mark today's International Day for the Elimination of Violence against Women, staff of the Secretariat of the Pacific Community have taken part in a pledge ceremony. 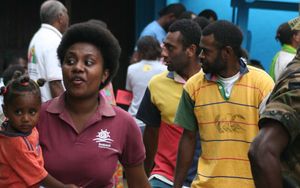 Led by the SPC Director-General Dr Colin Tukuitonga, staff pledged never to commit, condone or remain silent on such violence at a regional conference in Noumea.

They were joined in the pledge by another 50 male delegates to the meeting.

The SPC Deputy Director of Energy, Solomone Fifita, says he signed on as he doesn't believe in any form of violence against women as it is not acceptable in the Tongan culture or his religion.

In leading the campaign, Dr Tukuitonga emphasised the need for a shift in attitudes before violence against women can be systematically addressed.

He says all men should be concerned about the well-being and safety of their daughters, grand-daughters, sisters, mothers, partners and friends.

White Ribbon Day will be observed across all offices of SPC, and it's also establishing a White Ribbon advocates programme in member countries.