The French Polynesia assembly is poised to ask France for 930 million US dollars in compensation for environmental damage caused by its nuclear weapons tests. 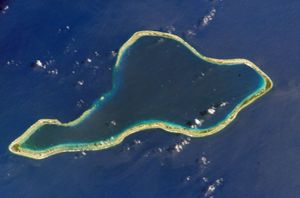 The request has been prepared by an assembly committee and marks the first time that the ruling anti-independence Tahoeraa Huiraatira Party has taken issue with the French testing regime.

The proposed resolution also demands an additional 132 million US dollars for the continued occupation of Fangataufa and Mururoa atolls, which France excised for its tests, but has not returned yet.

The French Polynesian president, Edouard Fritch, who is the Tahoeraa deputy leader, was reportedly unaware of the assembly move and expressed his disappointment at the action.

The assembly move is being spearheaded by its new president, Marcel Tuihani, who is seen as a protege of the party leader Gaston Flosse - the veteran politician ousted from public office in September over a corruption conviction.

At the time, Flosse accused the French president, Francois Hollande, of being weak for not pardoning him and showing gratitude that he for decades defended the French tests.

Between 1966 and 1996, France carried out 193 nuclear weapons tests in the South Pacific and at its end, Flosse negotiated an annual transfer of 150 million US dollars to help restructure the economy.