Two public petitions, signed by most of the adult residents on Norfolk Island, will be presented to the Australian House of Representatives and its Senate tomorrow.

The petitions, which call for more consultation on the future governance arrangments for the island, follow a recommendation from Canberra that 35 years of autonomy be repealed.

The federal Government wants the island to have a local council type administration.

Norfolk's Chief Minister, Lisle Snell, is leading the delegation to Canberra, and says they are fighting to keep the right to self determination. 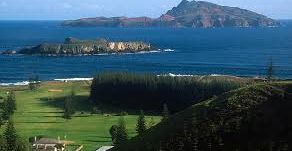