Cambodian government officials are expected to travel to Nauru as early as this week to give refugees a realistic idea of what life would be like in Cambodia.

The Phnom Penh Post says unconfirmed reports suggest Cambodian officials will travel to Australia this week, before flying on to Nauru to meet asylum seekers to discuss their option to be resettled in south-east Asia.

Cambodian Interior Ministry spokesman Khieu Sopheak says it's not a trip to advertise Cambodia, but to give them an honest idea of Cambodia life, culture, and history, for example, how the people suffered under the Khmer Rouge regime in the 70s.

He says Cambodia is not a developed country like Australia, where the refugees want to stay.

Refugees on Nauru have been told they will never go to Australia but will be allowed to resettle on Nauru on a five year visa, or can choose to be resettled in Cambodia.

Initially the deal was supposed to transfer up to 1,000 refugees from Nauru to Cambodia but latest reports suggest the deal could be much smaller, beginning with only four or five refugees.

The United Nations, aid groups, and international law experts have questioned the legality of the Cambodia-Australia deal, as well as the practicalities of sending refugees to one of Asia's poorest, most corrupt, countries. 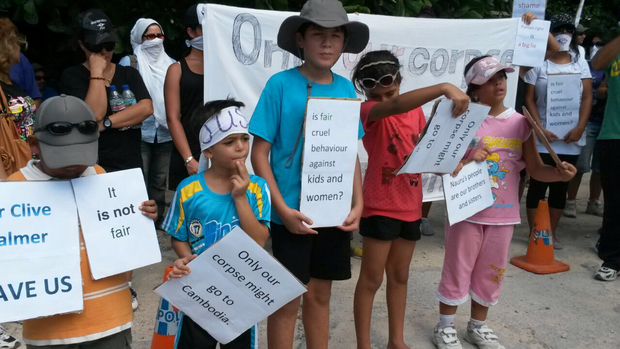