Fiji's media authority has defended its silence over a breach of the electoral decree by the public broadcaster.

Since Fiji Broadcasting Corporation flouted the three-day media blackout before the September 17th election, by featuring FijiFirst advertising on its website, the chair of the Media Industry Development Authority, Ashwin Raj, has been silent.

He says no official complaint was received, but the matter is worth investigating, and he has been told FBC is carrying out its own investigation.

"I do want to allay any kind of anxiety that people might have that there is some kind of preference given to a particular news outlet or given some kind of exemption. Let me assure you that the law applies equally and consistently to everybody." 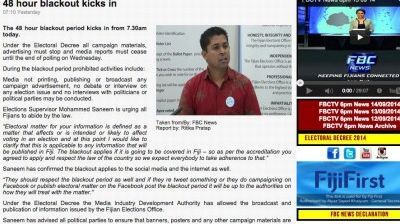