Vanuatu will field a record number of local players this weekend in their rugby league international clash with the Philippines in Santo.

The Melanesians have been slowly building their national programme over the last few years.

They played a pre-season match against Queensland Cup side the Sunshine Coast Falcons earlier this year and last year played tests against Solomon Islands and Niue.

"The beauty about getting more guys from Vanuatu [is] that was our remit when we very first started this whole process a few years back. We really wanted to give guys on the island an opportunity to represent their nation and their people and now we're seeing the fruits of that labour where players are not only getting that opportunity but, as a result of the exposure, they're then getting opportunities to come here to Australia and link in with local club sides, which is giving them more experience and opportunity to travel".

Dane Campbell says Australian scouts have been invited to this weekend's game, for which they're expecting a crowd of three to four thousand. 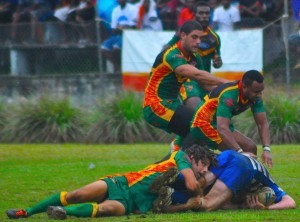