The Solomon Islands government says it wants to establish legal labour arrangements with Australia and New Zealand under which its people can be trained to improve their skills. 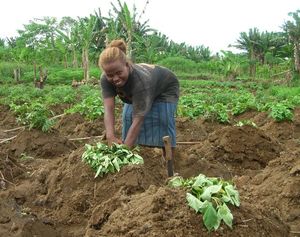 Traditional Pacific crops, such as these in Solomon Islands, are failing in the face of extreme weather and rising water levels. Photo: RNZ / Annell Husband

The Under Secretary of the Ministry of Foreign Affairs and External Trade, Joe Ma'ahanua, says Solomon Islands currently takes advantage of a Seasonal Workers' Exchange Scheme with New Zealand and a Mobility Workers' Scheme with Australia.

Some workers, who are semi-skilled and skilled, work in New Zealand, while others with no skills at all work in Australia, mostly as fruit pickers.

But Mr Ma'ahanua says he will be pushing the idea at a two-week meeting of member countries of the PACER PLUS beginning in Auckland on Wednesday.

He says the government wants workers' exchange schemes to be legally binding and not run on ad-hoc or trial basis.

He says the skills obtained from such attachments can be used back in Solomon Islands.