A Pacific studies academic Steven Ratuva says Frank Bainimarama's landslide victory in the Fiji election is mainly due to his appeal to all ethnicities. 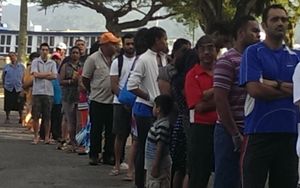 Voters in Fiji wait for the polls to open. Photo: RNZ / Philippa Tolley

He says the prime minister's FijiFirst party garnered about 58 percent of the indigenous Fijian vote and about 70% of the Indo-Fijian.

"For the Indo-Fijians, since the 1987 coup and since the 2000 coup they've been looking for something and that is political security. For them security can be provided most effectively by an indigenous Fijian who provides them that political space and support."

About 70 percent of FijiFirst voters chose the leader as their preferred candidate.