The polls for Fiji's general election are closed after voting in the country's first election since a military regime seized power in 2006.

Reports from Fiji say polling was conducted smoothly with people enthusiastic about the chance to vote for a democratically elected government.

Vote counting has started in Fiji in the country's first election in eight years.

Polling centres closed at six o'clock this evening and the turnout appears to have been high.

The elections supervisor Mohammed Saneem says that some provisional results could be expected tonight. 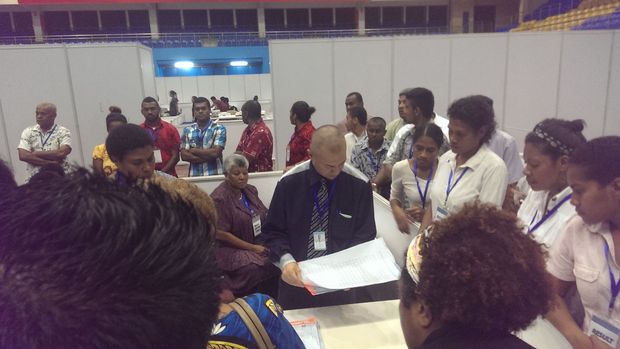 Ealier in the day, at some venues, long lines formed and people had to wait several hours to cast their ballot.

But one of the co leaders of the international observer group, Peter Reith, says he spoke with people who laughed about the delay and he quizzed them on other issues.

"I asked people, 'Did you feel that you were making your own decision. In every case they said Yes' There is a fair amount of enthusiasm I must say from the people I have spoken to, which I must say is a positive thing."

Meanwhile police have arrested a 52-year-old farmer in Seaqaqa for allegedly breaching the electoral decree.

At the Korotolutolu polling station, the voter allegedly took a voter instruction booklet given to him by an elections official, and threw it on the floor before uttering negative comments.

A police spokesman, Rusiate Tudravu, is quoted saying their investigations are continuing and the matter will then be forwarded to the Fiji Independent Commission Against Corruption for further action.