Polling booths are due to open at 7.30 this morning in Fiji's first election since the 2006 coup.

Sally Round reports from Fiji.

"It's hoped today's public holiday will encourage a good voter turnout and employers have been reminded they face up to ten years in jail and a hefty fine if they restrict workers from getting to the polls. Under 30-year olds make up the biggest proportion of Fiji's 600-thousand registered voters who must cast their ballot at one of 13-hundred odd pre-assigned polling venues. There's been a mixture of hope and fear in the run-up to this long-awaited election which tries to do away with voting along ethnic lines. As polls get underway the military is on standby and Fiji's police chief says he won't hesitate to call in the army should law and order break down. The polls close at six this evening." 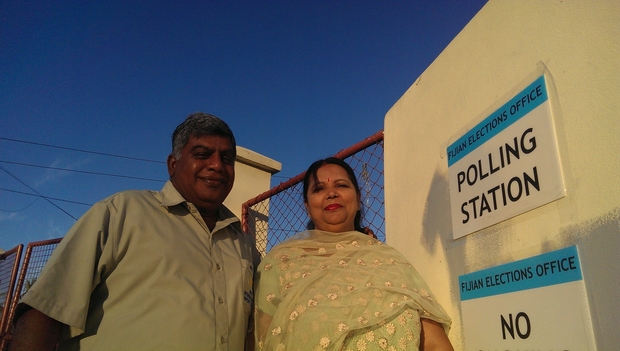 Vinod and Aasha Chandra head to the polls in Fiji Photo: Sally Round