There has been a good turn-out in early voting in Fiji's election. 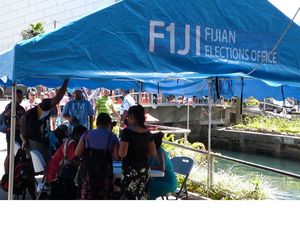 The elections office says 77 percent of those who could vote in pre-polling have taken part.

The supervisor of elections, Mohammed Saneem, says the turnout is a reflection of people's pride at voting and joy at having a say in the country's future.

It is more than eight years since Fijians last had an opportunity to vote.

Because of the number of young people in Fiji's population, about half of those voting will never have taken part in a poll before.

The Police Commissioner has sent out hundreds of officers to provide security at polling stations and says he won't hesitate to call in the military in order to keep the peace.