One of Fiji's soldiers seized in the Golan Heights says their Syrian captors will free them soon. 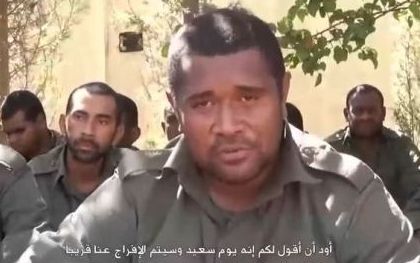 The message is contained in a video released by the Al Nusra Front, which captured 45 Fijian peacekeepers serving with the UN two weeks ago.

"We've been informed that we will be released soon and we are all very happy to be going home. By the way, we are all safe and alive and we thank Jabhat Al-Nusra for keeping us safe and keeping us alive. I would like to assure that we have not been harmed."

The video comes amid negotiations between the UN and the Syrian rebel group, which had set three conditions for the Fijians' release.

Fiji military commander Major General Mosese Tikoitoga this morning cancelled his press briefing about the Golan Heights situation, saying a written update on the soldiers' fate would come from the government's Information Ministry.

The switch to written and not oral briefing came one day after both the Fijian military and the information ministry issued different versions of the status of the soldiers.

General Tikoitoga apologised for what he termed the confusion from Wednesday's briefing, and he said future situation reports would now come from the government's information service.