The salvaging of the Paul Russ cargo ship, which ran aground entering the Port of Saipan in the Northern Marianas, has been complicated by the discovery of unexploded ordnance near the vessel.

The 526-foot long, 16,000-ton Antigua and Barbuda-flagged container ship ran aground on the reef off Micro Beach on Monday.

A 24-hour 500-yard safety zone has been established in the area which prevents any vessel from entering or departing the Port of Saipan.

Our correspondent in the CNMI, Mark Rabago, says homeland security has been fairly tight-lipped on the discovery.

Mark Rabago says there is 400 thousand gallons of fuel estimated onboard the grounded vessel, but there have been no reports of an oil spill. 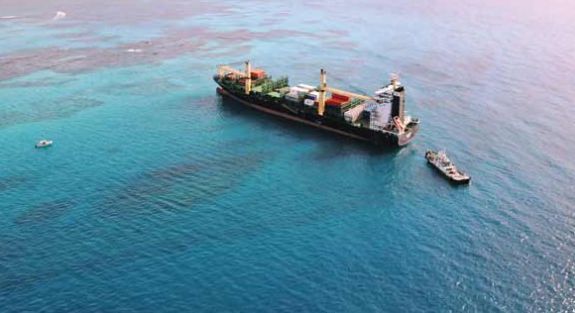 An aerial shot of the Paul Russ ship ran aground entering the Port of Saipan, in the CNMI. Photo: supplied