A former Chinese citizen, Ruihua Yau, has been declared stateless by the Vanuatu government.

Under Vanuatu's Citizenship Act, a foreigner must live in Vanuatu ten years before he can apply for citizenship.

The Minister of Internal Affairs, Charlot Salwai, says the government is discussing Mr Yau's case with the Chinese gvernment.

Mr Salwai says at the moment, Vanuatu cannot deport Mr Yau because his Chinese citizenship was withdrawn when he signed up for Vanuatu citizenship.

The previous government, headed by Moana Carcasses, had appointed Mr Yau as Vanuatu's Deputy Ambassador in Beijing but this was terminated when Joe Natuman became prime minister. 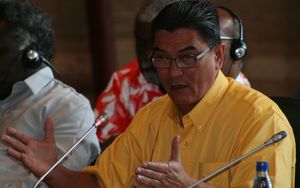