The King of Wallis has been dismissed by traditional leaders of the island French territory, following growing concern over his political interventions. 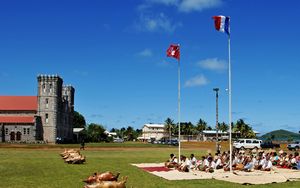 King Kapeliele Faupala has been on the throne since 2008, and angered many when he sacked two Prime Ministers this year.

Les Nouvelles Caledoniennes is reporting he has been removed by powerful families upset at his moves against the political leaders.

The public sector has been under pressure, with an 18-day strike in July blocking access to the administration building and the territorial assembly before an accord was made with the workers.

The French president, Francois Hollande, is due to visit the territory later in the year, as part of a regional tour en route to Australia for the G20 summit in November.