A former Fiji member of parliament has criticised the New Zealand government for allowing the Fiji Prime Minister to enter the country and rally support before next month's election.

Rajesh Singh was an MP in the SDL government ousted by Rear Admiral Frank Bainimarama's coup in 2006. 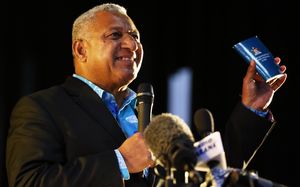 At the Vodafone Events Centre on Saturday, Mr Singh joined a group of about 25 protesters, who marched from the Manukau library carrying placards and chanting against the Fiji leader.

A scuffle with supporters of the Prime Minister was suppressed by security, before Rear Admiral Bainimarama arrived to speak. Later, protesters yelled complaints during his address.

Mr Singh says a dictator has no place in New Zealand.

"I am very disappointed, because I think the New Zealand Government shouldn't allow dictators to come here, and this guy has blood on his hands, he has destroyed our country and he made all these false promises that he will look after the people, that he will give a transparent, accountable government and all this."