The Fiji Prime Minister has told an Auckland meeting today that his opponents are losers, and Fiji has never been better than under his rule. 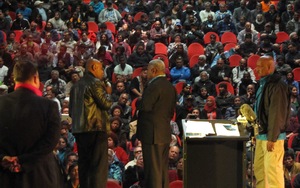 Rear Admiral Frank Bainimarama gave a speech to hundreds of supporters at the Vodafone Events Centre in Manukau, which was often interrupted by protesters.

The media were not permitted to ask questions, and the question time was mainly dominated by comments of support, mostly thanking him for bringing in equal citizenry for all ethnic groups in the country.

He outlined his vision for Fiji and what his government has achieved since the 2006 coup, and in particular the 2013 Constitution.

In the face of protests by a minority of the attendants, he told the audience he disregarded them.

"I've been told not to worry about the devils.... but seriously, I have another term for that... they are nothing but a bunch of losers."

Rear Admiral Frank Bainimarama told one supporter that the best way to ensure there are no more coups is to vote for him.

He had to face ongoing interjections during his speech, some of them protesters who had earlier been involved in a scuffle with FijiFirst supporters in the Vodafone Events Centre carpark.

When challenged by an audience member to guarantee that there would not be another coup, he responded that it was a hypothetical question, and no one knew.

However he also used it as a chance to pitch for votes.

"You are asking a hypothetical question. You don't know what will happen, no one here knows what will happen in the next two weeks. (What is the guarantee that it will not happen again?) You vote me, you vote me into parliament, and there will be no coup."

Rear Admiral Frank Bainimarama did not agree to field questions from the media.