The leader of Fiji's Labour Party, Mahendra Chaudhry, says the upcoming election is about democracy versus dictatorship. 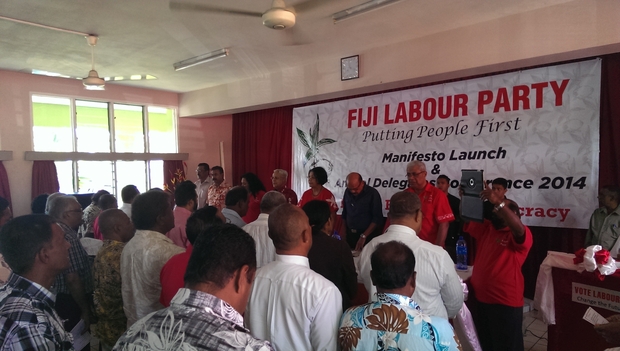 Members at the launch of the Fiji Labour Party's Manifesto in Suva Photo: RNZI / Sally Round

He told a party meeting to launch Labour's manifesto that if the people wanted freedom, they had to vote against the regime-backed Fiji First Party.

With banners flying, logoed t-shirts on sale and a band playing the new campaign song "It's time to be free", the party faithful laughed and applauded as Mr Chaudhry denounced the regime and its eight years in government.

He said nearly half of Fiji was now in poverty and people had lost freedom.

Mr Chaudhry said Labour's policies would focus on the needs of the masses, but first, "tattered" confidence in Fiji would have to be rebuilt.

The former Prime Minister said the election was crucial - but it had been manipulated - saying plans were working to perfection and predicting confusion on polling day.