One person is dead after being swept out to sea and at least three homes and a church have been damaged by a landslide after hours of severe weather.

Residents on the hillside of neighbouring Utulei village were evacuated as a precaution.

The homeland Security Public Information Officer, Faletoa Ulufale, says Samoana High School is housing 13 people while 86 are being housed at the home of the LBJ hospital chaplain.

"A lot of the areas, right in the area of Gataivai, behind the CCCAF church are heavily damaged, some of our homes were totally damaged and displaced the families."

Faletoa Ulufale says some of the families were able to seek shelter with relatives, but those with nowhere to go have been able to utilise the emergency shelters. 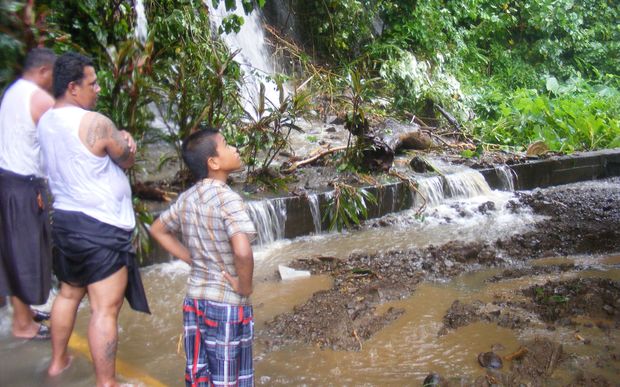 Three individuals survey a small mudslide behind an office building in Fagatogo village. Mud and water made it into the first floor of the two-story building. Photo: RNZI / Fili Sagapolutele