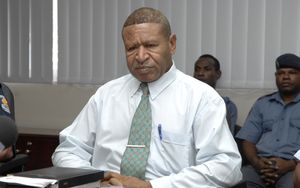 Police fraud officers filed the charges two weeks ago over Mr Vaki's refusal to enforce an arrest warrant issued by the district court on the Prime Minister, Peter O'Neill, over his alleged involvement in corrupt payments to a law firm.

Our PNG correspondent, Todagia Kelola, says the Chief Justice, Sir Salamo Injia, has reviewed the case and determined that it must be heard by the full bench of the Supreme Court.

"The contempt proceeding is stayed indefinitely while everything has been referred to a full bench of the Supreme Court to determine whether there were any contemptious actions by Mr Vaki."

Todagia Kelola says the case is expected to be heard by the court on Friday, although it may be fast-tracked.