Fiji's deposed prime minister, Laisenia Qarase, says the people of Fiji did not have a say in the making of the 2013 Constitution and it was just imposed on them.

Fiji Live says he made the comments during a campaign meeting for the Social Democratic Liberal Party at Samabula East on Tuesday night. 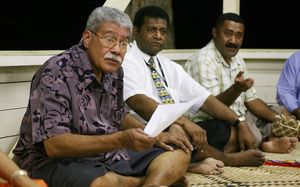 He told the audience that the 2013 constitution is different from other constitutions because Fijians did not have a say in its content.

But an election pamphlet isssued by the regime's political party, Fiji First, says the constitution enshrines principles that are at the heart of the world's great democracies - an independent judiciary, a secular state, and a wide range of civil, political and socio-economic rights.