The United Front for a Demcratic Fiji says its sceptical about the asset declarations of the Prime Minister's Fiji First Party. 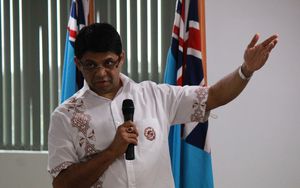 In the declarations which were published on Friday, the Prime Minister, Rear Admiral Frank Bainimarama is reported to have a net worth of just over 28,000 US dollars, while his deputy, Aiyaz Sayed Khaiyum, has a net worth of $69,000.

Both receive salaries of between 100 and 153 thousand US dollars a year.

But Mick Beddoes says the figures declared are inconsistent and unbelievable.

"I believe they're stating their salaries as of today and not necessarily from the prior years. They've been in government for eight years, they can't possibly have been earning nothing for eight years to end up in a situation where in actual fact the assets that they have accumulated over eight years amounts to what has been declared."

Mick Beddoes from the United Front for a Democratic Fiji.