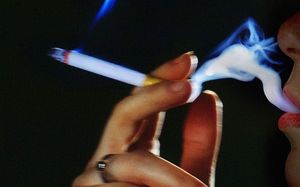 Concerns have been raised in Kiribati of a local cigarette manufacturer not attaching health warnings to its packaging.

The Kiribati Indepedent reports that it's illegal for the company, Wishing Star, to sell the cigarettes without any labelling, but the health ministry says it's instead focussing on children's food, where some of the labels are in Chinese.

Many people in Kiribati make a living from selling a local rolled cigarette known as niimoko, which is made from tobacco and pandanus leaves.