The Tongan Government says it will put the iconic Dateline Hotel out to tender again so it can be redeveloped and hopefully boost tourism. 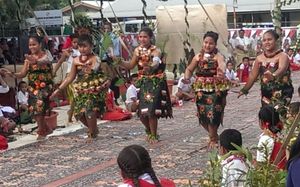 Last week's budget announcement included an allocation to complete the repayment of a Chinese loan, as the government had acquired the property in 2012 from Janfull International.

Last year, the government and the Tanoa Hotel Group pulled out of a deal, as each side accused the other of not honouring essential components of a gentleman's agreement.

The CEO of the Ministry of Finance, Tetafu Moeaki says the successful company will have the money, the experience in running hotels, and the plan to fit in with the Tongan government's ideas for the site.

He says Tanoa has two of those attributes and he would like to see them apply.

"So we have tried to modify the tender process so as to have a better chance of getting the kind of investor that the government wants. I mean we would like to see them because they are a good brand around the region."

The CEO of the Ministry of Finance, Tetafu Moeaki.