Save the Children in Solomon Islands says there's an outbreak of leprosy affecting 24 people living in displaced people's centres in Honiara.

The head of logistics and emergency, Graeme Kenna, says no one has died from leprosy but the situation is stretching the health services in Solomon Islands as the country struggles to recover from the severe flooding in April. 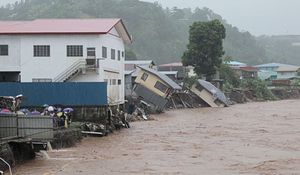 Twenty seven evacuation centres were set up after the April floods in which thousands were left homeless and at least 22 people died. Photo: WORLD VISION / AFP (FILE)

He says this latest outbreak is compounding efforts to contain the rotavirus illness which has claimed the lives of a further two children this week, taking the death toll to 18 in the past three weeks.

"Leprosy does happen in Pacific Island countries. But to have a sudden reporting of 24 cases, most of them in young children is quite alarming. The government is telling us and the World Health Organisation are telling us that they have the situation under control."

Save the Children's Graeme Kenna says authorities are now searching to see how many other people could be affected by leprosy.